A handful of Orthodox Christians from Eastern Europe met on July 10, 1955 at 2730 Bildahl Street to formally organize a new Orthodox parish. According to an affidavit filed in Winnebago County, those who attended elected trustees and adopted the corporate name, “Orthodox Church, Christ the Savior of Rockford, Illinois.” Today, after more than fifty years of the worship of the Holy Trinity at the Christ the Savior Orthodox Church, the bold hopes of these founders inspire us even as we look forward to the future of the parish.

These few faithful were refugees who had left their homeland in the region of Ukraine, Belarus, and Poland behind them. By the grace of God, they had escaped the ravages of war in their native land. They had fled west not knowing what was ahead, but knowing very well the carnage that they had left behind. Yet more hardship awaited them as they were forced to work in labor camps during the brutality of World War II. When Nazi Germany was defeated, they still languished in camps in Germany. Again they knew the toil and heartaches of their past, but they did not know what lay before them in the future.

In faith, they waited for permission to come to America. Finally, late 1949, a group of these “displaced persons,” the founders of the parish, arrived in New Orleans. They soon awakened from their dream of living in a new land of freedom to the toil of picking cotton in Arkansas and Georgia. When they had paid for their passage to America, they made their way north to the city of Rockford to face still new and unknown challenges.

Between 1949 and 1952, others joined this pioneering group in Rockford. All of these immigrants had come with only one thing to hang onto--their hope in the God of promise. Yet even while they struggled to build their homes and families in Rockford, they took on the added burden of building an Orthodox church. They wanted to continue in the traditions of their homeland-- the faith, the sacraments, and the life of the Orthodox Church that had been such a foundation of their to hope through the trials of their journey to America.

Having elected their leaders, the Orthodox faithful quickly purchased land for a church building. Already in the fall, they had a groundbreaking service and started construction of the church basement on the property at the corner of Pershing Avenue and Sewell Street on the Southside of Rockford. While it was being completed, the first priest, the Very Reverend Karp Pateyuk presided at Divine Liturgies and conducted weddings in the chapel of the Second Congregational Church in Rockford.

When the basement was completed in 1956, Divine Liturgies, weddings, and feasts were celebrated there by the Very Reverend Wasil Antoniew who succeeded Father Pateyuk in 1957. A cornerstone was laid and construction of the upper level was finished in the same year.

A Rockford Register Star article described the church as “one of Rockford’s newest and most colorful churches.” The paper reported that it had “bright hued icons (religious paintings), 120 seats, and cost $40,000 in building materials.”

The church members built the church with their own hands and their own funds. In a statement made in the Rockford Register Star in 1960, Council President Stefan Soroka expressed the virtues of self-reliance, hard work, and independence that had made it possible for the faithful to survive the ordeals of their past. He said that the church “did accept any money or material aid from any outside head of an ecclesiastical province or diocese… ‘so that no metropolitan could consider the church in his jurisdiction.’”

Nevertheless, on October 15, 1961, the Right Reverend Bishop Matthew of Wilno, Poland formally dedicated the Christ the Savior Orthodox Church. At the same time, Bishop Matthew ordained Janke Valukievic as deacon, and he has faithfully served the parish since then.

The priest at the consecration was the Very Reverend Wissarion Jeskow. He performed baptisms at the church from February 6, 1957 to April 21, 1962 . 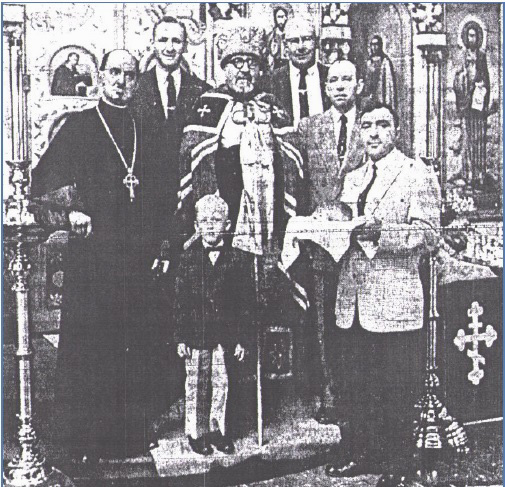 Searching for a Priest and Entry into the Carpatho-Russian Diocese

Parish correspondence indicates that already in September 1964, the parish was looking for an ordained priest who could teach the children the Orthodox faith in English. Parish leaders contacted several Orthodox jurisdictions about a priest who could handle English as well as “Ukrainian, White Russian, and/or Russian.” The American Carpatho-Russian Diocese responded positively, and eventually the church was admitted into the diocese.